﻿ Casyopee - Creating a function by a formula, calculating, graphing, tabulating, solving
By continuing your navigation on this site, you accept the use of cookies to offer you contents and adapted services. Legal Notice.

We wish to define the function of repartition for the normal law and to know the critical value for the 0,95 threshold

We shall use the first item by formula of the entry Create function in the Algebra menu.

As a difference with Figure 3 - Expression creation box, the dialog box includes a button for entering the independent variable identifier. Note that several identifiers can be chosen, x being proposed as a default. Note also that, optionally, like for expressions, it is possible to ask Casyopée to check whether the function defined by the formula is actually defined for all real numbers (check box Check Existence).

After the function has been defined, the Calculate button offers three additional calculations, specific for the functions. We try here the entry “anti-derivative” whose result is the standard normal cumulative distribution with a constant difference. Since the function obtained is null for t=0, we define a function g by adding ½. (Create function / by formula then enter the formula 1/2+If(t)).

Note the buttons at the bottom of the graphic tab that allow graphing functions and calculating limits. In the tool bar at the top of the tab, several zooming are accessible with one button. Here, to correctly frame the curve, it has been necessary to zoom in y several times, and to zoom in x once. Axis have also been moved simply by dragging the graph with the mouse. Framing would also have been possible by entering numbers by way of the W button or by dragging the axis unit arrows. Another possibility is via a “zoombox”. Maintain the Ctrl key down, click a corner of the rectangle you want to zoom in, and drag towards the opposite corner. After confirming, the graph will fit into your rectangle.

Tabulating the functions is done by way of the

allows copying the table into the clipboard (separators: tabulations and line breaks). It is then possible to paste the data into a text processor or a spreadsheet. 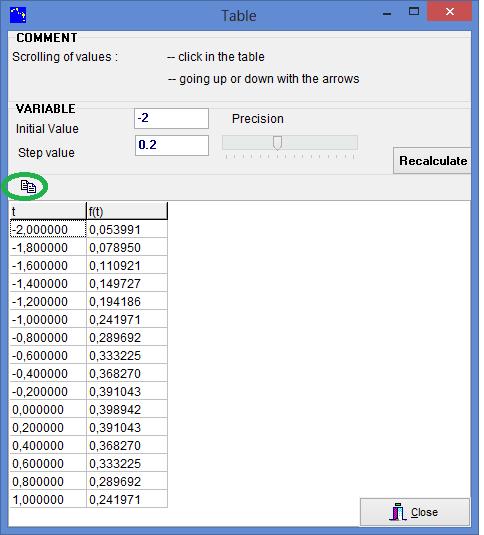 We now approach the critical value of the standard normal law at the level of 0.95.  For a graphical study one can enter a constant function h and point the intersection of the graphs in order to move a cursor and to read approximate values.