﻿ Casyopee - Functions with values in IR² and parametric curves
By continuing your navigation on this site, you accept the use of cookies to offer you contents and adapted services. Legal Notice.

What they say:   I used Casyopée to help students solve optimisation problems. It allowed me to present students very open tasks. Students explored and found results that they had to prove afterward. Casyopée also helped students reuse basic strategies for solving.   A teacher
What they say:   Casyopée is faster and more convenient than a calculator.... We have the geometric and algebraic side of the problem at the same time. It is easier to see how a function "reacts." It's useful and interesting.   A student
What they say:   Casyopée makes it easy to calculate a derivative, to factor, to calculate zeros... and have a graph of the function next to it in the same window. It allows on a geometric problem to be able to establish variables that can then be used to study the problem by way of functions...   A student
What they say:   Casyopee is a powerful application that can prove useful to both students and teachers It allows you to use various exploration and modeling tools, with the purpose of studying or teaching mathematical functions.   Softpedia
What they say:   Casyopee comes with lots of features. One of these features is the help provided for proving a function. There is also a feature for writing HTML reports that include the mathematical functions. Casyopee is guaranteed to improve the mathematical knowledge of its users.   phpnuke.org
What they say:   Besides the concept of number, the concept of function is the most important one in mathematics      David Hilbert
What they say:   The notion of function is present in all scientific disciplines, and also in everyday life. Our experience as a teacher shows every day that it is a problem for many students. Situations with Casyopée can also be used outside of a technological environment and everyone will be able to reflect on her professional practice.   A university teacher
Functions with values in IR² and parametric curves

Functions with values in IR²

Functions with values in IR²

Figure 132{C} Entering  a function with values in IR²

The display in the algebraic tab is the same as compared with functions with values in IR. The same transformations are applicable. Each sub-function can be obtained via the sub-expression entry.

Figure 133{C} Function with values in IR ²: transformations and graphs

The graph window displays the two graphs in the same colour. The bigger pointer is for the first function. You can move it and the other follows.

After entering a function with values in IR², the corresponding parametric curve is displayed via the create curve menu of the Geometry tab. When moving the pointer in the graph window, a mark moves accordingly over the curve. 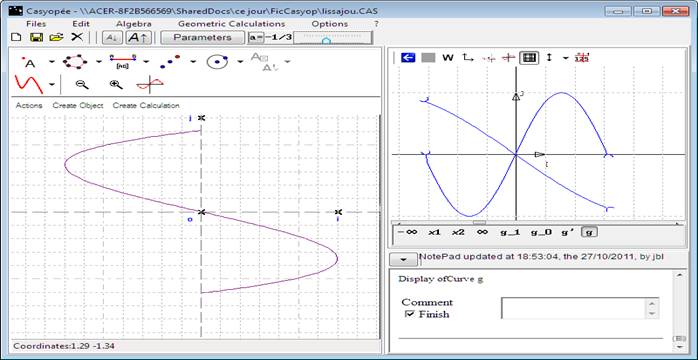 It is interesting to explore various configurations by changing the value of the parameter. 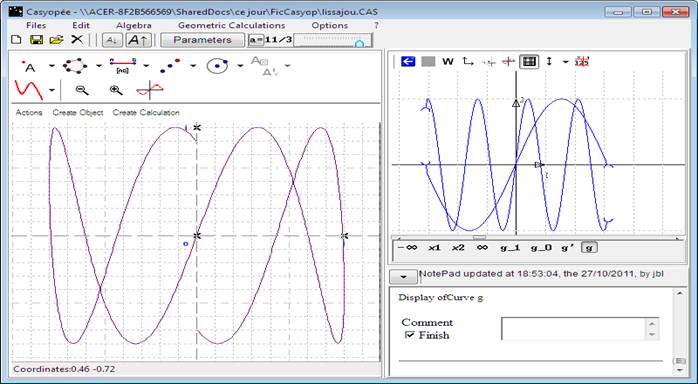